According to Plato, the freedman in bondage is the philosopher, who can see the beings themselves, the ideas, but not their images. His companions who are in chains are common people who, having being addicted to the deceptive performances of perceivable things, live, without knowing, in a lie. Of course there is always, according to Plato, the potential of disentanglement for the chained from their fallacies. In order to succeed, they need to disengage themselves from their chains. These symbolize their senses, which make them observe only the deceptive images of ideas, the real beings. Instead of their senses they will have to trust their mind.

The metaphor of the cave is an attempt to validate the philosopher’s position as a king in the Ideal State. The prisoners start to accredit the unreal shapes of shades with terms and meanings, whereas they believe that these shades are reality.

The fact that the prisoners can only see these shades, it doesn’t mean that the real world is limited in the cave. If some of them manage to come loose from the chains and get out of the cave, they will get blind from the sun’s light and they will return back. If, however, they get used to the light, they will see the sun clearly, which symbolizes the Good, and they will understand that what they saw in the cave were just copies of the real ones. They might think of getting back, feeling sorry for their companions who are still in prison. However, back in the cave, they will not be able to get used to the dark, and, trying to teach the truth to the rest, they might receive their hatred and reaction.

Socrates: "And if anyone would like to try to set them free from their chains and lift them up, wouldn’t they be able to kill him if they could catch him? Since they would consider that he wants to harm them and blind them whereas he wants to show them the real Light". Glafkon: "By all means". We have many sad historical examples hereto. Socrates himself had a tragic ending, because he introduced standard demons…

However, the ones who were set free, the philosophers, have the obligation to return back and teach the rest.

Usually, the Sun, which symbolizes the Good, make us interpret the allegory of the cave from a religious point: Without God, people live in the darkness.

The world in the cave, throughout the work of ‘Politia, expresses the obsession in things we can sense, the ones that people can realize with their senses, whereas the rise in the real world and the sight of real ideas under the light of the sun, lead according to Plato to the ultimate truth:

The balance of the three parts of the soul and the reinforcement of reason.

Grounded in the same position the prisoners can only see shadows and, without any other stimulus, they take their authenticity for granted. Their chains deprive them of any movement, willful energy and expansion of their visual field. Personal action does not exist. There is only sight but this no more than just a passive observation of events, acceptance without objection of the data of the senses, ignorance, fallacy.

The rising in the world of the light indicates a course, which starting from a negative knowledge, the knowledge of ‘what is not’, ends in self-awareness and world-awareness. The people in the cave represent the obsession of the soul in palpable things, their overestimation, the total dominance of the senses and its desired section over reason. The attachment to what is happening brings confusion to the soul, illness, whereas the sight of the beings internal balance, the balancing of the three sections of the soul and the reinforcement of the part of reason. For Plato, the request for self-awareness is fundamental. Even if the philosopher-leader who will govern the perfect State is never found, every person individually will have to aim at adjusting the polity of his soul.

The Media and propaganda

People, from antiquity until present years live as prisoners in our bodies, in hallucinations, in our illusions and delusions which are created by selfishness, desire for gain and power, individualism, indifference for others, attachment to the needs of the body and what our personal satisfaction commands and the unquestioning obedience in what we are presented as real and as our unique choice in life. In order to know the truth, we have to set ourselves free from the chains of the senses but also from the chains of the several governors, who let us see only the copies and the deceptive shadows of reality.

But there comes a moment, when some prisoners, manage to set free from the influence of the senses and the doctrines and get to know the truth, by relying to the proof that only reason and pure thought can provide. These people are the philosophers and ‘the trained’, the educated, whose education shows them the way how, eluding the several dogmatic nets, to escape from the fate of the prisoners in the cave.

Besides, the world of the cave and what happens in it is so taken for granted, that there is no doubt about whether it is real or not. However, this happens to our reality as well where granted and real are considered what the media show, what we learnt at school, what we realize with our senses but not our mind, the wishes that come from our body’s needs but also the confirmation needs of our ego and all these have as a result to lead people to the illusion that they are alone and the only way to survive is to the detriment of others and nature itself.

"ONE AND SHARED IS THE WORLD FOR THE AWAKE. THE ASLEEP LIVE INDIVIDUALLY IN THEIR OWN WORLD." 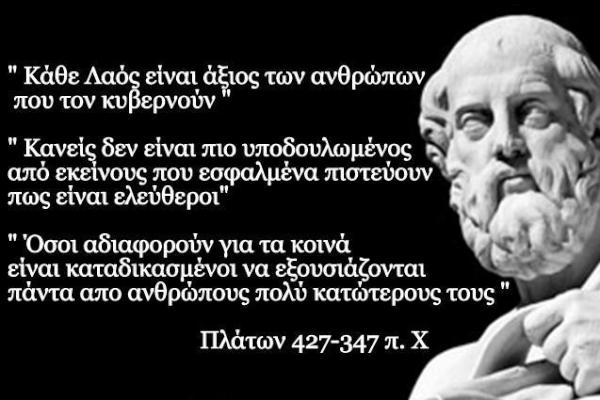